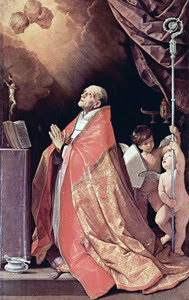 Andrew was born at Florence of the noble Corsini family in 1303. He was the fruit of his parents’ prayers and was consecrated by them to the Blessed Virgin Mary. His future was thus shown by God to the mother. She dreamt that she had given birth to a wolf which went to the church of the Carmelites and, as it entered the threshold, was suddenly changed into a lamb. Though his early education was one which was calculated to form him to piety and to everything that suited his high birth, by degrees Andrew fell into a vicious manner of life notwithstanding the frequent reproaches made him by his mother. But as soon as he was told that he had been consecrated by his parents to the Virgin-Mother of God and heard of his mother’s vision, he entered the Order of Carmelites. The devil ceased not to molest him, even then, with manifold temptations, but nothing could make him change his resolution of entering the religious life.

Shortly after his profession Andrew was sent to Paris for a course of study. Having completed it and taken his degrees, he returned to Italy and was made superior of his Order in the province of Tuscany. It happened about that time that the Church of Fiesole lost its bishop, and Andrew was chosen as his successor. But looking on himself as unworthy of such a dignity, he hid himself so that no one knew where he was. But a child who had not yet received the use of speech, miraculously revealed the place outside the town where he was, upon which the Saint, fearing that further refusal would be a resistance to the divine will, was consecrated bishop. Thus exalted to so great a dignity Andre applied himself more than ever to the practice of humility, which had always been his favourite virtue. To the zeal of a good pastor he united tender compassion for the poor, abundant alms-giving, a life of prayer, long watchings and other virtues, all which, together with the gift of prophecy he had received, gained for him a great reputation for sanctity.

Pope Urban V hearing of his great merits sent him as his Legate to Bologna to quell a sedition that had arisen in that city. The fulfilment of this charge cost him much suffering, but such was his prudence that he succeeded in restoring peace among the citizens and so prevented further bloodshed. He then returned to Fiesole. Not long after, being worn out by ceaseless labours and bodily mortifications, and having been told by the Blessed Virgin Mary of the precise day of his death, he passed from this life to the kingdom of Heaven in 1373, in the seventieth year of his age. Great was the reputation of his name on account of the many and wonderful miracles wrought through his intercession, and at length he was canonised by Urban VIII. His body reposes in the church of his Order at Florence. The citizens of that city, having often experienced that his relics have drawn down the divine protection on them in times of public calamity, their devotion to the Saint is very great.


The saintly Bishop whose feast we keep today pressingly invites us, by his austere life and his burning zeal for the salvation of souls, to procure, at all costs, our own reconciliation with the Divine Justice. We are indebted for this feast to a member of the illustrious family of the Corsini, Pope Clement XII who, however, was but the instrument used by Divine Providence. The holy Bishop of the little town of Fiesole ever sought to be unknown during his life and God, who willed that he should be glorified by the whole Church, inspired the Sovereign Pontiff to inscribe his name among the Saints of the universal Calendar. Andrew the Saint, was once a sinner. His example will encourage us in the work of our conversion.

Hear, O holy Pontiff, our prayer: we are sinners and would learn from you how we are to return to the God we have offended. His mercy was poured out upon you. Obtain the same for us. Have pity on Christians throughout the world, for the grace of repentance is now being offered to all. Pray for us that we may be filled with the spirit of compunction. We have sinned. We sue for pardon. Intercession like yours can win it for us. From wolves, change us into lambs. Strengthen us against our enemies. Get us an increase of the virtue of humility which you had in such perfection, and intercede for us with our Lord that He may crown our efforts with perseverance, as He did yours, that thus we may be enabled to unite with you in singing forever the praises of our Redeemer.

Also on this day according to the ROMAN MARTYROLOGY:

At Rome, St. Eutychius, who endured a glorious martyrdom, and was buried in the cemetery of Callistus. Pope St. Damasus wrote an epitaph in verse for his tomb.

At Thumuis in Egypt, in the persecution of Diocletian, the passion of blessed Philaeas, bishop of that city, and of Philoromus, military tribune, who rejected the exhortations of their relations and friends to save themselves, offered themselves to death, and so merited immortal palms from God. With them was crowned with martyrdom a numberless multitude of the faithful of the same place who followed the example of their pastor.

At Pelusium in Egypt, St. Isidore, a monk renowned for merit and learning.

The same day, St. Gilbert, confessor, In the town of Amatrice, in the diocese of Rieti, the decease of St. Joseph of Leonissa, of the Order of Friars Minor Capuchins, who suffered many afflictions from the Muslims. As he was celebrated for his apostolic labours and miracles, he was placed on the list of holy confessors by Pope Benedict XIV.

And in other places, many other holy martyrs, confessors and virgins.