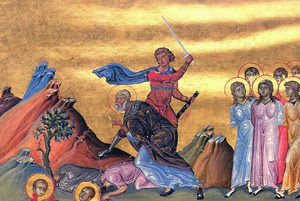 Blaise, whose signal virtues made him dear to the people of Sebaste in Armenia, was chosen Bishop of that city. When the Emperor Diocletian waged his cruel persecution against the Christians, the Saint hid himself in a cave on mount Argeus, and there he remained sometime concealed but was at length discovered by some soldiers of the governor Agricolaus while they were hunting. They led him to the governor, who gave orders that he should be put into prison. During his imprisonment, many sick people, attracted by the reputation of his sanctity, came to him and he healed them. Among these was a boy whose life was despaired of by the physicians, on account of his having swallowed a bone which could not be extracted from his throat. The Saint was twice brought before the governor, but neither fair promises nor threats could induce him to offer sacrifice to the gods. Whereupon he was first beaten with rods, and then his flesh was torn with iron hooks while he lay stretched on the rack. At length, he was beheaded, and nobly gave testimony to the faith of Christ our Lord on the third of the Nones of February (February 3rd).


Now that the Church, has closed the joyous period of her Forty Days of Christmas and is putting us through a course of meditations on subjects which are to excite a spirit of penance within us, each of the Saints’ Feasts must produce an impression which will be in accordance with that spirit. From this day till Easter, we will study the Saints, as they come to us, in this special light: how much they laboured and suffered during their pilgrimage of life, and what was the plan they took for conquering the world and the flesh. “They went,” says the Psalmist, “and wept, casting their seeds: but coming they will come with joyfulness, carrying their sheaves” (Psalm cxxv. 6, 7). It will be the same with us and, at the end of our Lenten labours, our Risen Jesus will hail us as His living, regenerated children.

The Calendar of this portion of the year abounds with martyrs and, at the very onset, we meet with one of the most celebrated of these glorious champions of Christ. The scene of his pastoral virtues and his martyrdom, was Sebaste, a city of Armenia, the same that will give us forty martyred soldiers on a single day. The devotion to Saint Blase is, even to this day, most fervently kept up in the East, especially in Armenia. The Western Churches soon began to love and honour his memory, and so universally that we might call him one of the most popular of our Saints.

Accept, glorious Martyr, the praise which we, too, offer you in union with that given you by the whole Church. In return for this homage of our veneration, look down upon the Christian people who are now preparing to enter on the Season of penance and be converted to the Lord their God by holy compunction and tears. We ask it of you by your own combat: assist us in the one for which we are preparing. When duty required you to undergo tortures and death, it found you ready and brave. Our duty is expiation by penance, and your prayers must get us courage. Our enemies are not more cruel than yours, but they are more treacherous and if we spare them we are lost. Obtain for us that heavenly assistance which enabled you to conquer. We are children of the Martyrs. God forbid we should be degenerate!

Also on this day according to the ROMAN MARTYOLOGY:

In Africa, St. Celerinus, deacon, who was kept nineteen days in prison loaded with fetters and confessed Christ gloriously in the midst of afflictions. By overcoming the enemy with invincible constancy he showed to others the road to victory.

Also the holy martyrs, Laurentinus and Ignatius, his uncles, and Celerina, his grandmother, who had been previously crowned with martyrdom. They are highly praised in an Epistle of St. Cyprian.

In the same country, the holy martyrs Felix, Symphronius, Hippolytus and their companions.

In the town of Gap, the holy bishops Tigides and Remedius.

At Lyons, the Saints Lupicinus and Felix, also bishops.

The same day, St. Anscharius, bishop of Bremen, who converted the Swedes and Danes to the faith of Christ.

And in other places, many other holy martyrs, confessors and virgins.